building a sidebar with routing functionality with react-router 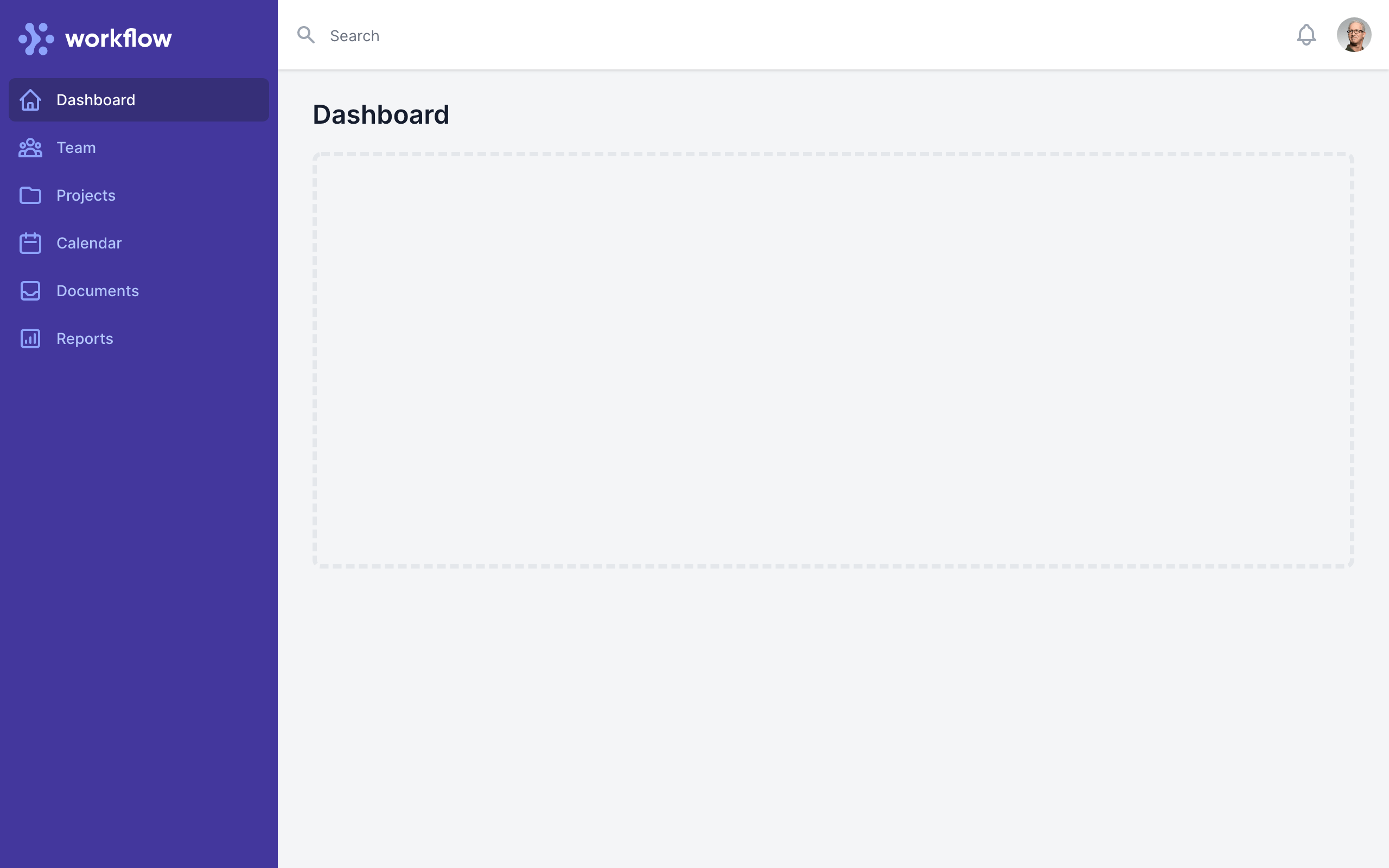 Sidebars are perhaps the most ubiquitous components in modern web app development. Almost every app built today requires it in some capacity. This applies to applications as complex as analytics dashboards to common applications like user-facing SaaS dashboard.

If that's the case, why not opt for a plug-and-play solution like react-sidenav? It's simpler and faster than rolling out your own solution, after all.

All it takes is reading the documentation, tinkering around with the library and hey-presto - a fully-functional sidebar.

The simplest reason I can give is that most sidebars I've come across don't reach the absolute minimum threshold for UI/UX that a sidebar should have. Keep in mind, these are all completely subjective (and perhaps overly pedantic to a certain group of people.)

Principles for a great UI/UX sidebar

Nevertheless, the most satisfying UI/UX experiences I've had when using sidebars have been as a result of a few core principles:

1. The sidebar should be navigation component, i.e. clicking any item takes you to a new route

This might be a matter of preference, but once a user clicks on a sidebar item, it should render a new route. That is, as opposed to using a state management system like Redux to display different components depending on what the user selected.

The best part about implementing a sidebar this way is that users aren't broken out of the normal flow they are probably used to when using a browser. For instance, they can take advantage of built-in browser functionality like the back & forward buttons.

Here is an example of a sidebar that isn't linked to the browser's navigation history:

2. The sidebar needs to remember its navigation state.

Being linked to the navigation alone isn't enough. A proper sidebar should also 'remember' its navigation state once a user refreshes the page.

Here is what it looks like when the sidebar doesn't remember the current state, i.e. when the browser refreshes, the sidebar goes back to the original page.

It's a major pet peeve of mine and perhaps the main issue I've had with most sidebar react libraries.

The same issue can also be seen when you navigate to other routes using the 'back' or 'forward' buttons.

In this example, despite the route changing when the 'back' and 'forward' buttons are used, they don't affect the currently selected item on the sidebar.

Incidentally, this is somewhat difficult to get dead right, and probably the whole reason I wrote this blog post. I struggled a bit before I was able to implement it in a way I thought was satisfying.

It has to be sticky.

Overflowing sidebars are just bad for user experience. With an overflowing sidebar, if you're all the way at the bottom of the page and need to redirect to a different route, you have to scroll back to the top first.

This is also surprisingly hard to achieve, but I'll show you how with some CSS trickery.

Here's an example of an overflowy sidebar:

Before we get started

A lot of other other libraries (eg. react-burger-menu have a ton of features I'll obviously be too lazy to add (animations, etc). Make no mistake, our project is going to be awesome, too, but don't expect too much flashiness (Just a not-too-much-but-still-kinda-lots amount because I love to get carried away with these tutorials :D).

You can install them by running

That is, of course, assuming you already have a project up and running. If not, it's as easy as

With that, let's get started!

First, we're going to set up four different dummy pages so we can route through all of them from a single component.

The other three files I didn't mention are:

Here's how to do it with react-router.

If you're familiar with react-router, there's nothing too foreign there.

Let's move on to Layout.jsx:

Don't worry about the sidebar for now - it's just an empty shell.

Here's what we have so far:

Since I'm not very good with colors, I rely on this handy tool whenever I need a set of colors that always looks good. Let's go with a deep shade of red (#c34a36) that's too overlooked.

Next, we need a foundation for what we want the sidebar to look like:

After a bit of CSS:

The boring and basic way to do this is simply including all the sidebar routes inside your Javascript file:

But I am lazy and I'll assume you're a decent programmer. Being a decent programmer, one of the things youll want to achieve is DRY code. It's a clever acronym that stands for Don't Repeat Yourself. I won't get into too many details, but DRY code is easier to maintain and enables reusability.

Hard-coding all the items is fine if you don't plan on using the code in other parts of your application, but creating an abstraction on top of repetitive code is good practice. So, let's do just that.

In a new file:

And our sidebar changes to:

Using styled-components, we can churn out the following sidebar

And the actual logic:

And with that, the easy part if over! Now we have something respectable:

Abstracting the sidebar in this way is useful because if you ever want to, say, change the background color of the sidebar item, you only have to do it in a single place. In addition, think about how much easier it will be to use an abstracted component if the sidebar items are dynamic and need to be loaded from the server.

Adding routing functionality to the sidebar

Next up, we need to get to the core functionality of our app: redirect users to different routes depending on what's been clicked.

Since we're using react-router, it might be tempting to just call useHistory and get it over with, but it's important to keep in mind how our document is structured.

Look at the graph below: 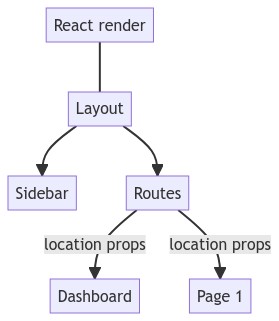 Notice how only Dashboard and Page 1 receive the location props. Indeed, if we tried to log the incoming props, you'll notice the Layout and Sidebar props are empty.

This puts us in a pickle because we need access to those props inside the sidebar!

Let's take a step back and rewrite our route component so the prop is somehow passed down.

Next, our sidebar needs to know where each item should redirect the user to

After making a minor change to our Sidebar.js file:

The first part of our not-so-complex app is done. Let's move on to a slightly more complicated problem.

Here is the current problem:

Every time the page is refreshed, the sidebar resets to 'index 0' making it highlight the first item on the list. We need to make it not do that.

We also need to synchronize the sidebar and the url so that heading to '/page-2' on the url bar also redirects us to the correct route on the sidebar.

Once this step is completed, our sidebar should look something like this:

Believe it or not, all the changes we need to make are going to be right within the Sidebar.js file. Magical, isn't it?

Here's what the code for our new sidebar looks like:

(The above code represents my thought process, not necessarily the best way to go about it. Notice how localStorage isn't even necessary at this point! It was the first idea I had but ultimately ended up being useless. The final code won't include it)

I hope you've been having fun because it's now crunch time. We need to get rid of annoying overflowy text :/.

Making the sidebar fixed (getting rid of overflow)

Here's what we don't want:

In other words, we want the sidebar to be fixed. If your instincts tell you to slap on position:fixed and move on, don't listen to it. Or at least not exactly.

There are a couple of ways to fix this problem, so let's cover a few of them: